Students at L.E. Willson Elementary School watched attentively as a national Blue Ribbon School of Excellence flag made its way up the flagpole during a ceremony to honor the school’s recent award. 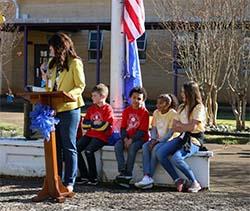 The coveted award is the pinnacle for schools, denoting academic excellence and affirming the hard work of students, educators, families, and the school community in creating a safe and successful learning environment.

The school’s award included Lighthouse status, the highest honor bestowed upon a school through the National Blue Ribbon School of Excellence program.

During the award ceremony, Principal Heather Collum reminded students that the high-flying blue flag is a“widely recognized symbol of exemplary teaching and learning.”

Sixth-graderAddieBlack said the award signifies what she’s always known about her school, “that we’re special and are top-notch, really standing out.” 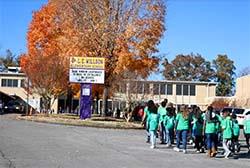 “We achieved Beacon status at that time and were directed to make improvements to our academic program, building appearance and community involvement,” Collum said.

“When I was blessed with the opportunity to lead this great school, I took Mr. Willis’s notes and started trying to implement those suggested improvements in order to try and get our little school on the bluff to become aLighthouse School. This was a team effort.”

Sheffield Superintendent Keith Davis said the accomplishment speaks highly of the school’s commitment to excellence.  “They had a goal in sight and reached it,” he said. “It’s commendable and speaks to their dedication.”

Third-grader Robynn Meade said she’s happy her school won the award, but she wasn’t surprised “I mean, we have a whole lot of good stuff going on at our school,” she said.